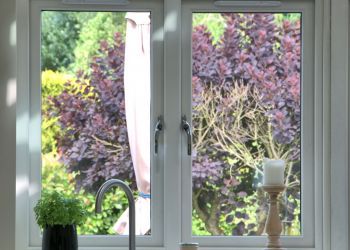 The main selling point of uPVC windows is that they are supposedly ‘maintenance free’. But WWF cite many examples of reports that show timber windows to be between 14–25% less expensive than uPVC when looking at the ‘whole life’ cost.

Camden Council argues that uPVC windows do degrade, they are not maintenance-free and worst of all they cannot be repaired when necessary. A National Building Federation report gives uPVC windows a life expectancy of 20-25 years, one report states that up to 40% of units are failing within 5 years.

As uPVC degrades from ultraviolet rays from the sun, it emits toxic gases, such as vinyl chloride, some of which enters the home, and eventually becomes brittle and powdery. If uPVC windows are not cleaned regularly they quickly get permanently discoloured through dirt retention; it’s then impossible to restore them to a nearly new condition.

The major defect insurer for housing associations states that uPVC windows must be cleaned every six months, lubricated and adjusted annually and have weather stripping and gaskets renewed every 10 years. Slight damage requires the whole unit to be replaced. So much for being maintenance free!

The public’s perception that timber windows fail is partly because of the reputation of poorly made softwood windows installed after the Second World War. Modern high-performance timber windows are treated against rot (guaranteed for up to 30 years) and are pre-finished. They need minimal maintenance and claim a 50-year life-span. They can then be repaired whereas uPVC windows need to be completely replaced every generation. Timber windows are also thermally efficient, slightly more so than uPVC windows, so residents are able to keep household heating costs down.

PVC is one of the most environmentally hazardous consumer materials ever produced.

PVC is the only major plastic that contains chlorine – the by-products are far more toxic, more persistent in the environment, and more likely to build up in the food supply & people’s bodies than similar chlorine-free chemicals. Chlorine production is one of the world’s most energy-intensive industrial processes, taking huge amounts of energy – about 1% of the world’s total electricity output. Chlorine production for PVC uses an equivalent to the yearly output of eight medium-sized nuclear power plants. Chlorine production causes mercury pollution which causes severe reproductive, developmental, and neurological impacts at low doses. uPVC window frames continue to release mercury whilst in use & after they are disposed of.

The production of PVC is one of the main sources of dioxin. Dioxin is thought to be the most toxic human-made chemical – the most potent carcinogen, and implicated in emphysema, disruption of the endocrine system, impaired child development, birth defects, neurotoxicity (damage to the brain or its function), and immune system suppression. Dioxin is a persistent bioaccumulative toxin (PBT) – it does not break down rapidly and travels around the globe, accumulating in fatty tissue and concentrating as it goes up the food chain. Dioxin exposure poses a risk of cancer thousands of times greater than the usual standard for acceptable risk. Dioxins concentrate in breast milk to the point that human infants now receive high doses, far bigger than for the average adult.

Because PVC catalyses its own decomposition, metal stabilisers are added to vinyl for construction and other extended-life applications. Common PVC additives are lead, cadmium, and organotins – all highly toxic.

Greenpeace research into uPVC found that recycled uPVC to be a false hope. uPVC is highly toxic, so recycling is highly dangerous and expensive, and releases chemicals such as chlorine and dioxin into the air and water supplies. Only 3% of PVC waste is recycled.

PVC production, recycling and disposal facilities are more often located in low-income and marginalised communities. Production, recycling and disposal of PVC are issues of environmental justice and environmental racism for workers and neighboring residents, in addition to the issues raised by the export of PVC waste to ‘developing’ countries. Making uPVC windows takes 8 times more energy than wood, and produces over 12 times the amount of climate changing CO2 compared to wood. A product that uses a non-renewable resource can’t be sustainable – oil makes up 43% of the raw material required to make PVC; timber from well-managed forests is a genuinely renewable resource with a very low embodied energy. PVC windows generate 43% more waste than timber windows.

What do other housing associations and councils do?

English Heritage warns of the destruction to historic buildings by the installation of uPVC windows. A growing number of local councils and housing associations are moving away from use of uPVC windows. The Peabody Trust, the largest charitable housing trust in London which manages much of Hackney social housing, has banned the use of uPVC windows in its buildings.

We are pleased to announce that from Monday 18th May we are open and operating as normal.

For any site visits that may be required please be reassured that we will be following Social Distancing guidelines.